I’ve decided to expand the scope of this blog into other areas of interest, albeit still related to the Bahá’í Faith. I won’t share many details at this point as I’m still deciding which ideas to go with. So hopefully the few people who peruse this blog will enjoy the material that I’m contemplating sharing.

In the year 1844, from the moment in which the Báb first revealed His station to Mullá Husayn in Shiraz, Persia, a tremendous spiritual energy was released into this, our physical world, realm… heralding the arrival and initiating the inception of the Bahá’í Faith. One consequence of this unseen divine outpouring unseen effusion was a rapid technological acceleration across the planet.

In this same year, for the first time a remote, or ‘long-distance’ form of communication was demonstrated after its development perfected. The invention of Samuel Morse, the telegraph marked the beginning of what has developed now into instantaneous global communication. It is surely no coincidence that the first message transmitted using the telegraph technology was “WHAT HATH GOD WROUGHT”… profoundly notable given that the 1844 population could have no idea that the ability to communicate across the globe would progress continually and exponentially in speed and convenience from this first seed-technology. 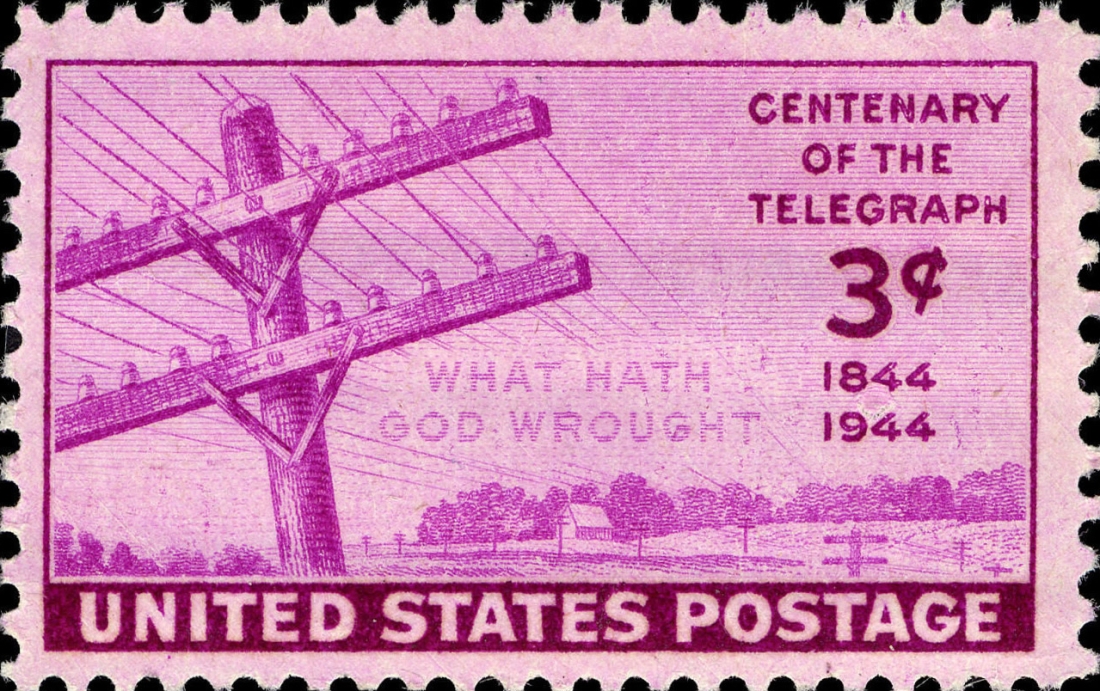 A superb example of history instructed through philately.

From this point, the direction of progress was expansively transcontinental, a network was laid spanning North America.

“As early as 1840 Samuel F. B. Morse proclaimed his faith in the idea of a submarine line across the Atlantic Ocean. By 1850 a cable was run between England and France.” (Wikipedia)

From its infancy, staggeringly only 14 years later, through which must have been monumental drive and effort a submarine telegraph cable was laid across the Atlantic Ocean – a distance of some 2000 nautical miles – once again forever changing the course of humankind’s development by ‘shrinking’ the geographical distances and collapsing the time required to send/receive information. This feat would have afore time – prior to 1844 – surely have appeared an impossible venture, improbable unfathomable and a reach too far.

“The first [cable] was laid across the floor of the Atlantic from Telegraph Field, Foilhommerum Bay, Valentia Island in western Ireland to Heart’s Content in eastern Newfoundland. The first communications occurred August 16, 1858, [… the cable having been laid by Cyrus West Field , an American businessman and financier] reducing the communication time between North America and Europe from ten days—the time it took to deliver a message by ship—to a matter of minutes.” (Wikipedia)

WASHINGTON CITY.
The President of the United States to Her Majesty Victoria, Queen of Great Britain.
The President cordially reciprocates the congratulations of Her Majesty the Queen on the success of the great international enterprise accomplished by the skill, science, and indomitable energy of the two countries.
It is a triumph more glorious, because far more useful to mankind than was ever won by a conqueror on the field of battle.
May the Atlantic Telegraph, under the blessing of heaven, prove to be a bond of perpetual peace and friendship between the kindred nations, and an instrument destined by Divine Providence to diffuse religion, civilisation, liberty, and law throughout the world.
In this view will not all the nations of Christendom spontaneously unite in the declaration that it shall be for ever neutral, and that its communication shall be held sacred in passing to the place of their destination, even in the midst of hostilities?
JAMES BUCHANAN

Again, it is interesting to note the spiritual/religious tone of this first official transmission, “destined by Divine Providence to diffuse religion…”, as well as the mention of its intended higher purpose differentiated from the warmongering and conflict for power-grabbing between nations.

We know in hindsight that the intended noble principle put forward by President Buchanan “that it’s communications shall be held sacred… even in the midst of hostilities” is something that has never happened in the real world up until this time. Within the arena of war and indeed even within peacetime, cyber-espionage and and counter-sabotage are routine affairs within some governments’ international relations.

Note: I’ve used substantial sections of text from Wikipedia from here onwards until my concluding thoughts, but have inserted my own choices of images sourced from Google.

This first message on the 1858 cable took over 17 hours to transmit. The messages were hard to decipher – Queen Victoria’s message of 98 words took sixteen hours to send.

The British government gave Cyrus Field a subsidy of £1,400 a year (£130,000 today) and loaned the ships needed. Field also solicited aid from the U.S. government. A bill authorizing a subsidy was submitted in Congress. The subsidy bill passed the Senate by a single vote… In the House of representatives, the bill encountered similar resistance, but passed, and was signed by President Franklin Pierce.

The first attempt, in 1857, was a failure. The cable-laying vessels were the converted warships HMS Agamemnon and USS Niagara. The cable was started at the white strand near Ballycarbery Castle in County Kerry, on the southwest coast of Ireland, on August 5, 1857. The cable broke on the first day, but was grappled and repaired; it broke again over the “telegraph plateau”, nearly 3,200 m (2 statute miles) deep, and the operation was abandoned for the year.

Landing of the Atlantic Cable of 1866, Heart’s Content, Newfoundland. 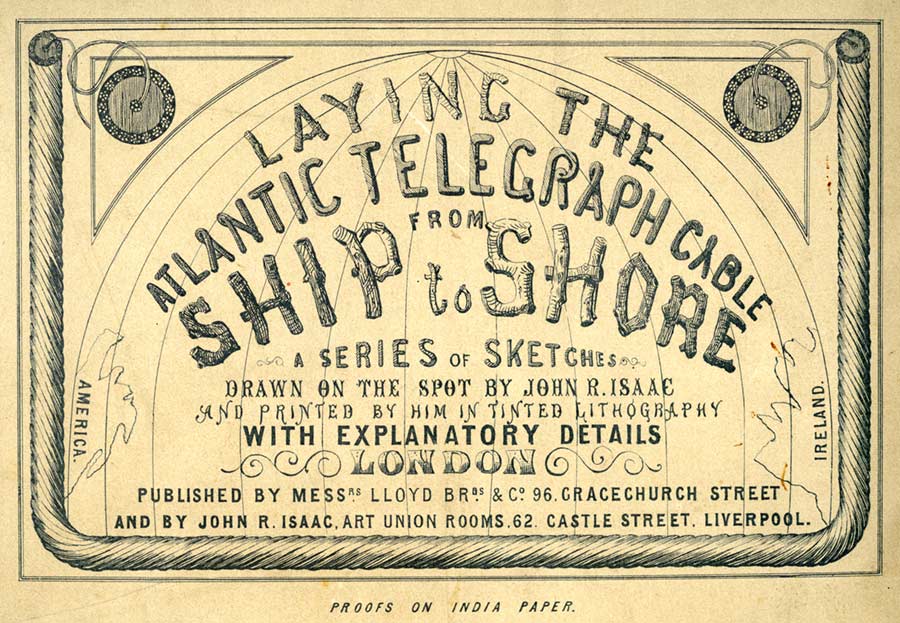 The following summer, after experiments in the Bay of Biscay, Agamemnon and Niagara tried again. The vessels were to meet in the middle of the Atlantic, where the two halves of the cable were to be spliced together, and while Agamemnon paid out eastwards to Valentia Island, Niagara was to pay out westward to Newfoundland. On June 26, the middle splice was made and the cable was dropped. Again the cable broke, the first time after less than 5.5 km (three nautical miles), again after some 100 km (54 nautical miles) and for a third time when about 370 km (200 nautical miles) of cable had run out of each vessel.

A map showing the relief of the sea bed upon which the cable was laid down. Also details of the cross-section of the cable, an illustration of the cable-laying ships sailing opposite ‘outwards’ away from one another, and above the morse code alphabet is displayed.

The expedition returned to Queenstown, County Cork, Ireland, and set out again on July 17, with little enthusiasm among the crews. The middle splice was finished on July 29, 1858. The cable ran easily this time. Niagara arrived in Trinity Bay, Newfoundland on August 4 and the next morning the shore end was landed. Agamemnon made an equally successful run. On August 5, she arrived at Valentia Island, and the shore end was landed at Knightstown and then laid to the nearby cable house.

These [first] messages engendered an outburst of enthusiasm. The next morning a grand salute of 100 guns resounded in New York City, the streets were decorated with flags, the bells of the churches were rung, and at night the city was illuminated. On September 1 there was a parade, followed by a evening torchlight procession and fireworks display, which caused a fire in the Town Hall.

Failure of the first cable

The operation of the new cable was plagued by the fact that the two senior electrical engineers of the company had very different ideas on how the cable should be worked. Lord Kelvin and Dr Wildman Whitehouse were located at opposite ends of the cable, communicating only by the cable itself.

Kelvin, located at the western end, believed that it was necessary to employ only a low voltage and to detect the rising edge of the current flowing out of the cable and, once this had been done, nothing would be gained by further monitoring (Morse code used a positive current for a ‘dot’ and a negative current for a ‘dash’). Kelvin invented his mirror galvanometer precisely for this task of observing the current change quickly. The cable was never put into service for public use, and never worked well.

Field was undaunted by the failure. He was eager to renew the work, but the public had lost confidence in the scheme and his efforts to revive the company were futile. It was not until 1864 that, with the assistance of Thomas Brassey and John Pender, he succeeded in raising the necessary capital. The Glass, Elliot, and Gutta-Percha Companies were united to form the Telegraph Construction and Maintenance Company (Telcon, later part of BICC), which undertook to manufacture and lay the new cable.

… and having borrowed heavily from Wiki to save duplication of effort, I return my own words…

The discovery and development of radio waves came along followed by the perpetual improvements in technology – leaps, bounds and then comparing retrospectively, entire paradigm shifts in nascent possibilities…

Technology is ever-advancing and increasingly information is transmitted under sea and over-land as modulated (laser) light along glass (optical) fibre cables. Speeds of transmission are to all extents and purposes effectively instantaneous and improvements in the technology (such as mobile 5G communications) are concerned with data-carrying capacity, i.e., the amount or quantity of information sent or received. Satellites technology emerged that can relay microwaves (high-altitude geostationary orbits) and radio waves.

In terms of communications, the scope of global distances has collapsed and the scale of information sharing has become astronomical in quantity. When there’s complete absence of technical glitches, information movement is effectively instant, delay negligible.

Access to this wealth of communication tools is not equal across the world at this time. Wealthier, more developed nations have a more established network built up by the advantage of greater resources of (and access to) wealth… provisioning a superior communicative infrastructure. However, circumstances are always improving in this matter and the inequality gap is gradually but gladly closing. Information assists the acquisition of knowledge and therefore all humankind needs access to relevant and reliable information in order to advance society, science and to promote the word of God in this day. It surely had been purposively ordained from that first diffusion of divine energy in 1844 that these extraordinary advances in technology came into being, to facilitate the spreading of the revelatory spiritual-social Words of Bahá’u’lláh, the Messenger of God for this time. God willing, society can accelerate the spreading of divine learning (religious and scientific) and individually/universally turn this into the essential wisdom needed to advance the material-spiritual lives of all peoples.

… most likely lost in Translation?